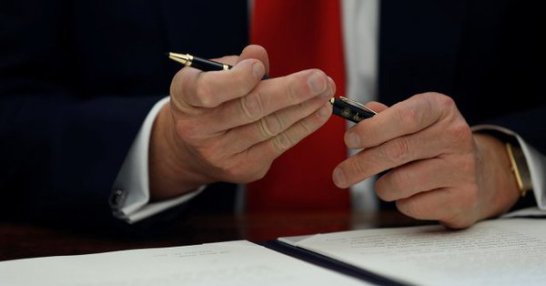 The President is signing new executive orders today which review significant 2016 tax regulations along with two separate reviews aimed at a roll back of Dodd-Frank financial regulations.

One order directs the Treasury Secretary to review “all significant 2016 tax regulations to determine if they impose an undue financial burden on taxpayers, are needlessly complex, create unnecessary requirements, or exceed what’s allowed under law.”

The other two Trump will also sign are related to the Dodd–Frank Wall Street Reform and Consumer Protection Act of 2010, which former President Obama signed in response to the 2007-2008 financial crisis.. One is intended to review Dodd-Frank’s Orderly Liquidation Authority to determine whether it “encourages risk-taking, creates moral hazard, or exposes taxpayers to potential liability.” The second one orders a 180-day review of Financial Stability Oversight Council designation procedures which is the process of designating banks and financial firms “too big to fail.”

“The purpose of the orders is to make clear what the president’s and the administration’s priorities are and to signify the importance of these issues to the American people,” Secretary of the Treasury Steven Mnuchin said.

Trump continues to forward his agenda as much as possible via executive fiat as the warring factions within the GOP struggle to get on the same page.

Do you think Dodd-Frank has helped or hurt our economic stability? Share your opinion in the comments section below.

Closing in on 100 days: Has Donald Trump Met his Committments?