After some six weeks and counting after the election, too much of America is beginning to surrender to some sort of “forced acquiescence.”

In the midst of the fog of this most recent election half of America is floundering to understand, “What happened?” Testimonies of voter fraud abound from hundreds of thousands of printed bogus ballots from China, alleged double counting of ballots, cemetery votes, illegal ballot harvesting, etc. So many questions but still no answers.

Do you really think that the institutions that orchestrated this whole thing are interested in the truth? No, their only interest was the outcome. They got the outcome they wanted, so it’s time to move on and accept the supposed results. After all, it was House Leader Pelosi who famously said, that “no matter the results of the election, Joe Biden will be inaugurated the 46th President of the United States.”

And remember it was VP Biden boldly bragging that he had put together the best voter fraud organization in history.” So, what did they know that we didn’t?

We have been conditioned to rely on the establishment media for our news and information, the arbiters of alleged objective news reporting. Our founding fathers and constitution protected them to protect us from political self-interest and corruption. So, how is that working out for us today? The establishment media has abandoned their responsibilities to become propogandists and ideologues. They have become lost and out of their lane as defined by our constitution and everyone is paying a price.

Even though our instincts are screaming out against the lie, we must accept and go along to get along. More and more people just don’t even want to talk about it anymore. And meanwhile, our nation continues to warehouse lie after lie.

We are becoming such useful idiots. We were raised on questioning authority, remember that? And now, critical thought and questions are surrendered to a class elite that is telling how we should think, what to say and how to live. The land of the free and home of the brave is becoming the land of the thoughtless and cowards.

We are skipping down the yellow brick road with our cowardly fellow lions looking to our ruling masters for sustenance and acceptance. Who has deceived you? It we don’t see this as a battle for good and evil, it may be too late. Yes, America and the world has grown too comfortable in accepting evil and is it any wonder we find ourselves so confused?

And we don’t have to go too far back in history to see the ill effects of turning a blind eye to evil. Evil is never satisfied and demands total obedience and surrender. It’s only when you’re trapped that you scramble for survival and if you’re able to be extricated do you wonder, how did this happen to us?

We say we have learned, and this will never happen again, until it happens again. It all seems to start with a lie that opens the door for evil to multiply and eventually take over every aspect of our lives. It metastasizes throughout our institutions, government, church, communications, entertainment, sports etc. Lying, steeling, cheating, and the erosion of our very moral character are scattered in the wake of our aimless lives. How sad and pathetic as we increasingly accept the unacceptable, without even a mere blush of shame.

We are warned of that day, when evil is called good and good is called evil. Well, that day is now. If we don’t reverse course now, this yellow brick road that leads to even more evil will end in disaster for us and our families. All it takes is more acceptance, acquiescence, turning a blind eye to be fully blind to the truth and be the victims to this diabolical dystopia.

And the question I keep hearing is, what can I do about it? I’m just one person. That’s the way change happens, with one person. The prevailing forces today want us to feel defeated and discouraged. As in history they are counting on good people staying quiet and passive. But I am starting to see people across our country shouting out their windows that they’ve had it and won’t take it any longer.

They are mounting up forces to take our country back, As President Trump said in his inauguration speech, that it’s time for the country to return to the rightful hands of We The People. This revolution starts with reclaiming our own lives, our families, children and wives, our communities, churches, states and country.

How we have lost our way to keep electing people in office that are not interested in serving but being served. Professional politicians who have carved out an elitist lifestyle at the people’s expense. How does this happen?

And as if that’s not bad enough, according to my friend Trevor Loudon, the author, preeminent researcher and political analyst, “We have continued to elect people in office who are card-carrying socialists and communists.” As he declares, you’d be surprised how many couldn’t even pass a security clearance to be a DC dog catcher. And yet, they are on committees with access to all the country’s most private national security files.

And it’s these very people and forces who are threatened by an America First policy and mind set. They do not support America First. They have been selling us out for decades at our expense and for their own greed and survival.

This can no longer be acceptable. There can be no room for “forced acquiescence.” America must come together and stand united against these diabolical forces. Today, they are not an existential threat, but they are amongst us, so the battle has come to us. Now what will you do for your God, your family and your country? 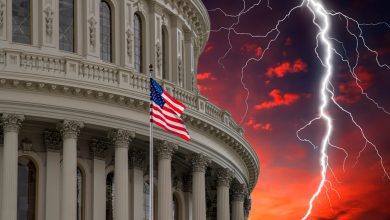 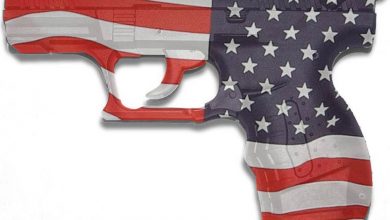