A special election will take place in Brooklyn on Tuesday, May 14th to fill the seat vacated by Jumaane Williams when he was voted New York City’s Public Advocate.

Haitian American Farah Louis is the candidate who tweeted, “Jews are annoying.”  Louis is a former staff member of Jumaane Williams.  Williams has a history of supporting and befriending Linda Sarsour, going back to defending her appearance on a CUNY campus two years ago.

Williams has endorsed Monique Chandler-Waterman in next week’s special election for the Council’s District 45 seat.

Adina Miles Sash aka Flatbush Girl is one of the candidates competing against Louis.  This is rare. Brooklyn can support one of their own.  Voters in the district can add a voice to fight the daily anti-Semitic acts and growing tensions between the Jewish and Black communities.

But will they? Probably not. Sash is a Modern Orthodox Woman, facing scrutiny from within the Jewish community.

At the recent Kings County Democratic Party event, Councilman Kalman Yeger and Chaim Deutsch posed for pictures with Louis as if it was an endorsement.  Why?  On April 1st, Yeger was removed from the council’s immigration committee for accurately tweeting that Palestine does not exist.  Chaim Deutsch was accused of being anti-gay and attacked in the media within 24 hours of the Yeger scandal.

It leaves us to ask ourselves, why aren’t we supporting our own? Why is our message inconsistent? One minute these leaders stand at press conferences demanding answers and action on what is happening against Jews, and then they stand for a photo with some of the enablers?

Every single day in Brooklyn, especially in religious communities, there are attacks on Jews, now being called hate crimes. Women with their strollers, high school boys and men walking to and from shuls are being verbally and physically bullied. Swastikas are spray-painted everywhere. Shuls and yeshivas must contract additional security.

It’s no different in Queens, where there is a special election on June 25th for Queens District Attorney. Queens Borough President, Melinda Katz, seems to have the lead among multiple candidates, including Councilman Rory Lancman.  Where are their voices opposing CAIR whose ties to Hamas and the Muslim Brotherhood are well known, when hosting events in Queens public venues like libraries?

I feel very lucky.  I don’t have to support these races, AND, I am a proud Trump, Republican supporter.  Our President doesn’t send mixed messages about his support for Israel or American Jewish issues.

Maybe that is why every single day I get asked to help counter an anti-Semitic, anti-Zion, anti-Israel or Pro-BDS event?  Is it any coincidence that I am also attacked and threatened for publicly calling out the hate from both extremes, the alt-left and the alt-right?

I must congratulate JoAnn Ariola-Shanks, Chairwoman of the Queens GOP.  For over a year, she has fought tooth and nail to fight all racism and anti-Semitism from rogue, political wannabes.

On Hitler’s Birthday during Pesach, Phony Trump Supporter Jovi Val, burned the Israeli flag and made videos of it, along with social media posts of him saluting Hitler with a Nazi flag.  This is the same Jovi Val who Ariola-Shanks has been fighting against. 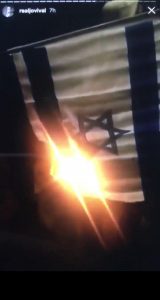 So, are Jews annoying?

I think embarrassing is more like it.  I wish I had a penny for every time I am asked why any Jew votes Democratic. Sash ran for district leader telling her social media following that in New York Jews can only vote Democratic if they want a voice.  That is NOT true.

Are we happy with Cuomo, DeBlasio and Gillibrand?  Are we embarrassed by Schumer, Nadler, Jeffries and our Attorney General Tish James?  James is more concerned about Trump’s taxes than New York criminal issues.

So, are Jews annoying?  Let’s prove just how annoying we are by not supporting these candidates in special elections.  Even better, vote Republican, vote Trump and vote for Jewish friendly leadership.

Even better, vote for Joe Borelli, Republican and Conservative Candidate for Public Advocate in November and tell Jumaane Williams we don’t like the company he keeps.  Here’s news, Borelli is part Jewish and I will share his story here exclusively in the future.

Do you also want to show Jewish support for President Donald Trump? Attend one of the birthday parties/galas celebrating his birthday that I am involved with:

You can email me for details at cindyscorners@gmail.com

Cindy Grosz is an award-winning pro-Israel and Education activist.

Is America Selective with Political Correctness?